Surgically, cervical lymph nodes are divided into 6-7 levels (only 6 according to many authors who exclude the level VII nodes) for staging of carcinoma which would also be the basis for selective neck dissection. There are 5 levels in the lateral compartment and 2 in the central compartment. Nodes not included in these system of levels are retropharyngeal group, periparotid group, buccinator group, post auricular group and suboccipital group of nodes.

The highest jugular digastric node near the angle of the mandible is called the “sentinel” node.
The “signal” node is the lowest along the internal jugular chain called the virchow nodes. 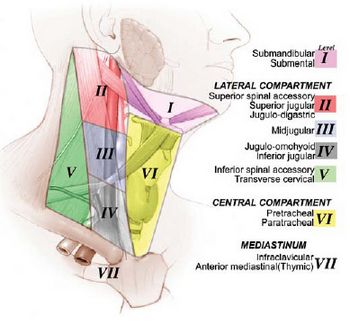