Circle of Willis is an important arterial communication that supplies the forebrain (telencephalon, diencephalon and optic vesicle) and often frequently tested in the exams. Circle of Willis receives blood from:

Here, we will learn a mnemonic to draw the circle of willis and intracranial course of Internal Carotid Artery (ICA). 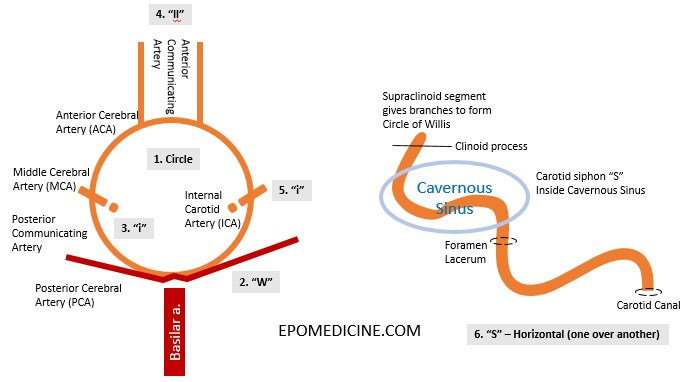 Step-wise instructions for drawing the circle of willis:

1. Draw a Circle – Circle of Willis is a circle of arteries.

Now write the “Willis” around this circle:

2. Write a large “W” at the inferior of circle – this represents Posterior Cerebral Arteries (PCA) which arises from a single basilar artery.

4. Write “l l” at the superior of the circle – this represents the Anterior Cerebral Arteries (ACA) along with the part of circle between the MCA-ICA and Anterior communicating artery.

6. Write a horizontal “S” – starting from carotid canal and ending in foramen lacerum.

7. Write another horizontal “S” beginning from the end of previous “S” –