We have already discussed earlier on the intracranial course of Internal Carotid Artery (ICA) and Circle of Willis formation with the help of a simple mnemonic.

General Concepts of Blood Supply of Brain and Spinal Cord

2. Forebrain: Circle of willis which comprises of –

3. The major vessels have 2 branches:

4. Segments of the arteries:

5. Leptomeningeal territories of arteries in general:

Location of Circle of Willis

The arteries get interconnected around the interpeduncular fossa which is a rhomboid (diamond) shaped space in the ventral surface of the brain formed by the 2 Optic tracts anteriorly and 2 cerebral peduncles from pons posteriorly. It encloses tuber-cinerum, mammillary bodies, posterior perforated substance and the occulomotor neve from anterior to posterior.

Importance of Circle of Willis

ACA runs in the interhemispheric fissure and arches anterior to the genu of corpus callosum and then along the cingulate sulcus to give off branches.

Remember: The course of ACA is more on medial and hence, have major supply on medial brain surface and also gives of medial striate branch as deep perforating branch.

Remember: The course of MCA is more on lateral and hence, have major supply on lateral brain surface and also gives lateral striate branch as deep perforating branch.

PCA courses backwards, beneath the splenium of corpus callosum, to the calcarine fissure and to the lateral occipital surface.

Remember: The course of PCA is backwards and hence, have major supply on the posterior brain surface. It gives thalamoperforating artery, thalamogeniculate artery and posterior chorodial artery as deep branches to supply the thalamus. 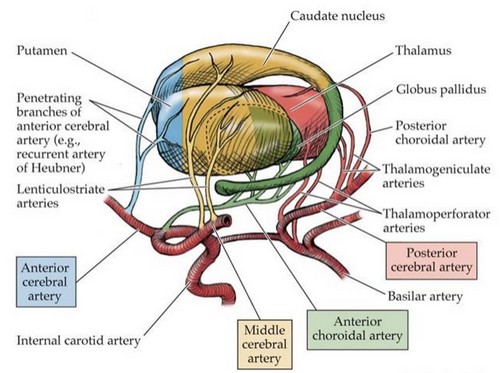 Branching points are the sites where arterial media are congenitally attenuated.

Remember the relations in interpeduncular fossa:

Watershed zones are the border zones that receive dual blood supply from terminal or distal branches of the 2 large arteries. Strokes in these areas (watershed stroke or infarction) occurs during severe hypotension when the cerebral autoregulation fails and these border zones are starved of blood.

The somatotopic sensorimotor area between the middle and anterior cerebral arteries encodes the proximal arms and legs. So patients with watershed strokes often manifest with “man in a barrel syndrome,” meaning they have trouble lifting their arms and legs but their hands and feet are fine.

The sensorimotor homnculus for leg and foot are in the paracentral lobule in the medial aspect of brain. Hence, the lesion leads to contralateral leg-foot motor and sensory loss.

ACA also supplies the majority of anterior portion of corpus callosum, the damage of which leads to transcortical apraxia (a disconnect syndrome). There is no motor weakness, but the patient cannot execute a command to move their left arm.

MCA supplies the lateral convexity (parietal region) of the brain including:

Lesion leads to contralateral homonymous hemianopia with macular sparing and alexia without agraphia if the lesion is on left side (dominant hemisphere). Alexia results as the visual information from intact right (non-dominant) cortex is blocked by the lesion and cannot reach the language area. This is due to damage of splenium of corpus callosum.

Previously, we have discussed about the various brodmann area’s location and functions. Damage to these areas have specific pathology.