Dura mater (pachymenix) is the outer meningeal layer consisting of:

These are the infoldings formed by the inner meningeal layer reflecting away from the fixed periosteral dural layer.

Dura is sensitive to pain, especially where it is related to the dural venous sinuses and meningeal arteries. Headaches can occur due to stimulation of the sensory nerve endings in the dura. It is innervated by all 3 divisions of the trigeminal nerve, sensory fibers of C2, C3 and meningeal branches of CN X and CN XII. 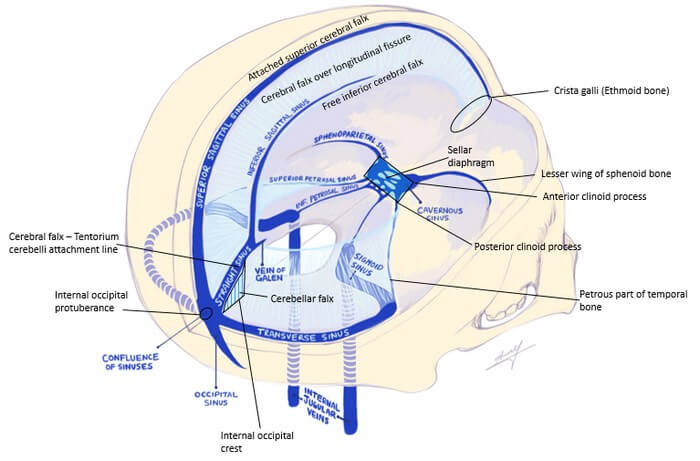 3. Straight sinus: lies at the line of attachment of falx cerebri and tentorium cerebelli

4. Occipital sinus: lies in the attached border of tenorium cerebelli

5. Confluence of sinuses (torcular Herophili): It is lies at the inner occipital protuberance and is formed by the union of:

It drains into the transverse sinuses.

7. Sigmoid sinus: as the name suggests, it follows “S” shaped pathway – inferomedially from the transverse sinus (parietal to temporal bone) and then anterolaterally (temporal to occipital bone) into the jugular foramen where it continues as Internal Jugual Vein (IJV).

Basilar venous plexus: lies over the basilar part of occipital bone and connects the 2 inferior petrosal sinuses and communicates with the intervertebral venous plexus.

Venous occlusion presents with a myriad of symptoms with variable severity. Sometimes the symptoms are as mild as simple headaches and other times they are severe enough to produce confusion, stupor, or even coma, along with paralysis and other focal neurologic deficits. Superior sagittal sinus or the dominant transverse sinus thrombosis can affect the arachnoid granulations absorption of cerebrospinal fluid, a consequently increase of cerebral swelling may occur. The subsequent venous hypertension can lead to oedema, and even hemorrhage.