Clubbing is defined as the focal and bulbous enlargement of the distal phalanges due to proliferation of connective tissue between the fingernail and the bone with increase in both the longitudinal and transverse curvatures of the nail plate and obliteration of onychodermal or lovibond’s angle (angle between the nail base and the adjacent skin fold). It affects both the finger and toe nails. It is regarded as one of the most ancient clinical signs in medicine which was described back in 400 BC by Hippocrates.

Clubbing is characterized by an increase in the pulp tissue due to proliferation of subungual connective tissue, interstitial edema and dilation of arterioles and capillaries. Multiple theories have been put forward as an explanation it, however the most accepted theory currently is “Platelet hypothesis”. 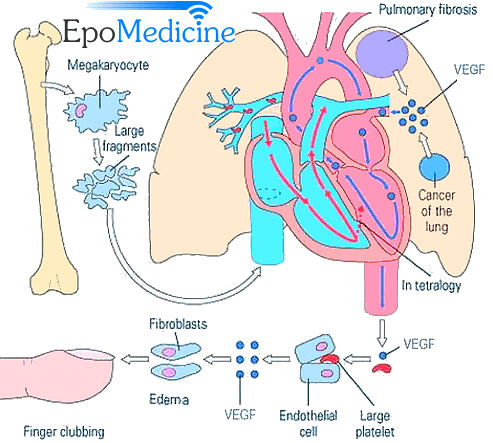 Megakaryocytes would normally break up in the pulmonary capillaries to the platelets but in the presence shunts or abnormal circulation within a neoplasm, these megakaryocytes bypass the pulmonary capillaries and reach the systemic circulation to preferentially lodge in the tips of the digits. These cells locally release Platelet Derived Growth Factor (PDGF) and VEGF along with other mediators that increase endothelial permeability and activate connective tissue cells including fibroblasts. Though widely accepted, this theory is unable to explain clubbing attributed to other several causes. Some of the other hypotheses are:

Eliciting the Signs of Clubbing

1. Lovibond’s profile sign: Bring the patient’s fingertip at the level of your eye and look tangentially for the onychodermal or lovibond’s angle.

2. Curth’s modified profile sign: Similarly, you can measure the angle between the middle and distal phalanx.

4. Schamroth’s window test: The sign is elicited by placing the dorsal surfaces of terminal phalanges on opposing fingers together. The normally formed diamond shaped window is obliterated in the presence of clubbing. This sign is also known as diamond sign.

5. Digital index: Ratio of circumference of finger at nail-bed (NB) to distal interphalangeal joint (DIP) i.e. NB:DIP is calculated for all the 10 fingers and summed up. The final value is divided by 10 and the resulting value is digital index (>1 in clubbing). 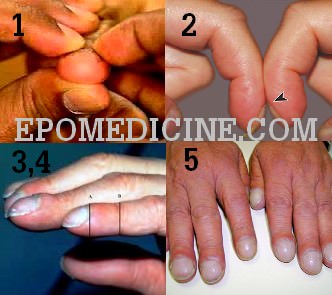 Various grading have been proposed for Clubbing but non has prognostic significance and is regarded as an utility of communication between the examiners. “Lung India” has proposed a grading based on the stages of clubbing:

Clubbing in COPD: Chronic emphysema and bronchitis doesn’t cause clubbing. The presence of clubbing in a patient with COPD should prompt a search for an underlying (lung) cancer, bronchiectasis or interstitial lung disease. In lung diseases, clubbing is seen either due to impaired lung function where PGE2 destruction by lungs is impaired or destruction of pulmonary capillaries resulting in escape of megakaryocytes into systemic circulation or excessive PGE2 or VEGF production by tumors.

According to some references, clubbing may be seen in chronic bronchitis but never in pure emphysema.

Aids for diagnosis of cause of clubbing

This type of clubbing is limited to upper or lower limbs alone and is often associated with cyanosis.

Pseudoclubbing is characterized clinically by asymmetrical involvement of fingers and radiographically by resorption of the terminal tufts (acro-osteolysis).

a. Subungual tumor or cyst