Lhermitte’s sign (pronounced Ler-meets) is an electric shock-like sensations, spreading along the spine in a cervico-caudal direction and into the arms and legs felt upon active or passive flexion of the neck.

Reverse Lhermitte’s Sign is defined when symptoms are induced by neck extension, not flexion.

Because flexion of the neck causes the dysaesthetic symptoms, it has been suggested that an increased mechanical sensitivity of these damaged myelinated axons in the dorsal cloumn of the spinal cord causes an abnormal origin or transmission of sensory information. 1Lhermitte’s sign in cavernous angioma of the cervical spinal cord. Murphy D.K., Gutrecht J.A. (1998)  Journal of neurology, neurosurgery, and psychiatry,  65  (6) , pp. 954-955.

Neck flexion causes a mechanical stimulation of the damaged myelinated axons by lengthening and deforming the affected area of the cervical spinal cord.

Reverse Lhermitte’s phenomenon is said to be induced by extrinsic compression of the cervical cord and neck collar immobilization. 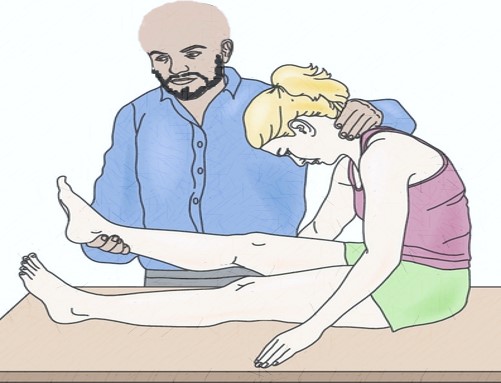 One patient described it as follows: “When I bent my head, I felt a violent shock in my neck and a pain like an electric current running through my whole body, from the neck down the vertebral column into the feet”. 38. Frederiks JAM. Lhermitte’s sign. In: Koehler PJ, Bruyn GW, Pearce JMS, editors. Neurological eponyms. Oxford: Oxford University Press; 2000. p. 106-10.