Mapleson B and C

Bain’s system: Co-axial modification of Mapleson D in which the FGF supply runs inside the corrugated tube through which the expired gases are eliminated. 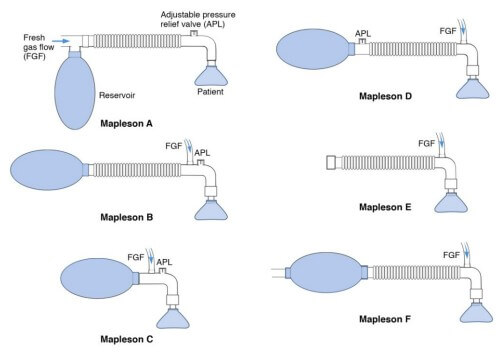 Physiology of Mapleson A

3. At the beginning of inspiration: Depending upon FGF, patient breathes in –

Physiology of Mapleson B and C

Since, the FGF inlet is near the patient end – during expiration, 1st part of expired gas, i.e. dead-space gas passes down the corrugated tubing, along with FGF and the tubing near patient end contains FGF and some alveolar gas.

As the valve is in patient end, a mixture of alveolar and fresh gas passes out via the APL valve.

During inspiration, a mixture of fresh gas and retained alveolar gas is breathed in.

APL valve in use of Mapleson D

Due to absence of APL valve, the resistance in the system is lower compared to other systems and are preferred in pediatric patients for both the spontaneous and controlled ventilation. In Mapleson F or Jackson Ree’s circuit APL valve are replaced with open ended reservoir bag. Functionally, they are similar to Mapleson D.

Aid for Viva-voce and Summary