Ostwald’s blood gas solubility coefficient: ratio of the concentration in blood to the concentration in gas that is in contact with that blood, when the partial pressure in both compartments is equal. This coefficient for nitrous oxide is 0.47. A gas with coefficient 0, i.e. totally insoluble has a very quick induction and recovery period. Similarly, nitrous oxide also has a relatively low blood gas solubility coefficeint – making the induction and recovery quick.

To understand the concept clearly, we will illustrate it with an example:

In comparison to this, if we had used a mixture of 10% nitrous oxide and 90% oxygen – the rise in alveolar concentration of nitrous oxide with obviously be very low. It would be about 5.3% by concentrating effect and 5.5. % by augmented inflow effect which is 5 times and 6.8 times less compared to the 50:50 mixture. 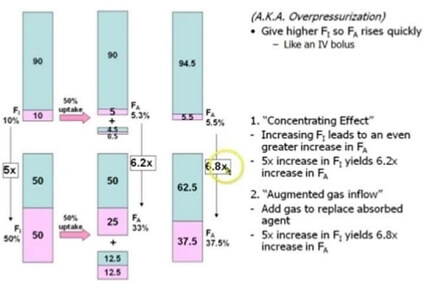 So, it is clear from the above illustration – greater the inspired concentration, the more rapid the rate of rise of alveolar concentration.

Second gas effect is not a different concept than the concentration effect. It is a special case of concentration effect and applies to administration of a potent anesthetic with nitrous oxide. Along with the concentration of potent agent in the alveoli via its uptake, there is further concentration via the uptake of nitrous oxide, a process called the second gas effect. Though it has low solubility in blood, about 1 litre/min of nitrous oxide enters blood in the 1st few minutes. If another potent anesthetic (second gas) is given at the same time, it also will be delivered to blood at a rate 1 litre/min higher than the minute volume and the induction will be faster.

The risk persists only for initial 3-5 minutes of discontinuing nitrous oxide. Therefore, it is appropriate to initiate recovery with 100% oxygen inhalation. It is not of much consequence if cardiopulmonary reserve is normal but may be dangerous if it is low. 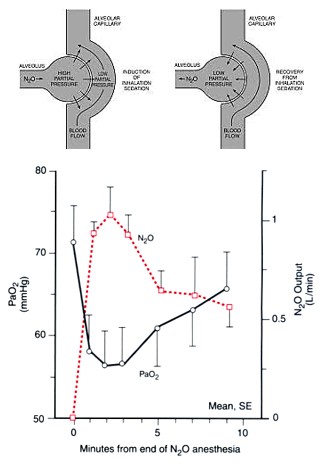