There are multiple choice questions (mcq) which asks: What is the most important urinary buffer? And the choices include both the phosphate and ammonia. Different textbooks on physiology and biochemistry have different opinions. Some say that the most important is Phosphate and the others say Ammonia is more important. So, lets dig the various references available to come to the conclusion. 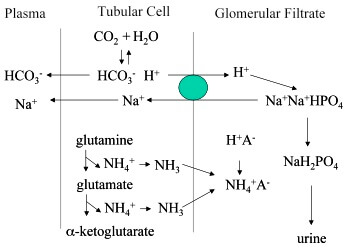 Guyton and Hall Textbook of Physiology

Phosphate is the most important urinary buffer.

Phosphate and Minerals in Health and Disease by Shaul G. Massry

While phosphate is a minor extracellular buffer, under ordinary circumstances it is the single most important urinary buffer. Since, pH of urine is commonly close to the pK of the phosphate buffer pair, it functions as an ideal urinary buffer.

The excretion of H+ in the urine occurs with different conjugate bases, which are grouped as titrable acids – mostly phosphates and nontitrable acids – mostly ammonium. The excretion of titrable acid has a limit, as it is dependent on the filtered load of phosphate and makes up a relatively small proportion of the acid excreted. However, the kidney can generate it’s own buffer – ammonia in substantial amounts, which can be upregulated in the face of systemic acidosis.

The phosphate available for buffering depends primarily on the dietary intake of phosphate-containing compounds. Phosphate is filtered through the glomerulus and partially reabsorbed proximally. The remaining 10-20% of the phosphate serves to buffer urinary protons. Because the pK for reaction HPO4²¯ + H+ → H2PO4 is 6.8, phosphate is a good urinary buffer. Since, most of the H+ excretion occurs distally, the quantity of phosphate buffer is clearly insufficient by itself to handle excreted protons. Furthermore, phosphorous is not regulated to maintain acid-base balance as much as it is to maintain phosphorous homeostasis.

The most important urinary buffer in NH3/NH4+. Under conditions of increased acid loads, more glutamine is transported into proximal cells and glutaminase activity is increased. Phosphorous buffering capacity of the urine is relatively fixed and largely determined by body phosphate balance, the amount of ammonia available can be regulated by the kidney to match the demands for acidification.

Phosphate, with pKa 6.8, serves as the most important urinary buffer because of its pKa being close to plasma pH. Its ability to serve as an important buffer decreases when urinary pH reduces to as low as 6. Under normal conditions, about 10 to 40 mEq of H+ per day are excreted as titrable acids. Because the amount of urinary phosphate is largely dependent upon dietary intake and glomerular filtration, the capacity of phosphate to buffer excess acid load is limited.

Human Physiology: From Cells to Systems By Lauralee Sherwood

Bicarbonate cannot buffer H+ as it does H+ in ECF because HCO3- is not simultaneously excreted with H+. Whichever of the substance is in excess in the plasma is excreted in the urine.

Normally secreted H+ is first buffered by the phosphate buffer system, which is in the tubular fluid because excess ingested phosphate has been filtered but not reabsorbed. As soon as all basic phosphate ions that are coincidentally excreted (because of dietary excess) have soaked up H+, the acidity of tubular fluid quickly rises as more H+ ions are secreted.

When acidosis exists, the tubular cells secrete ammonia into the tubular fluid once the normal urinary phosphate buffers are saturated.

Phosphate is the most important buffer in urine because its pKa is relatively close to the pH of glomerular filtrate and because the concentration of phosphate increases 20 fold.

In normal conditions: Phosphate is the primary urinary buffer.

During acidosis: The role of phosphate is limited as it’s secretion is not regulated by kidney but is dietary dependent. In such conditions, ammonia is the important buffer. 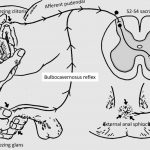 One Viewpoint 💬 on “Most Important Urinary Buffer: Phosphate or Ammonia?”