Over years, the use of the term Courvoisier’s sign or gallbladder has been suggested instead of law, because of rising number of exceptions. 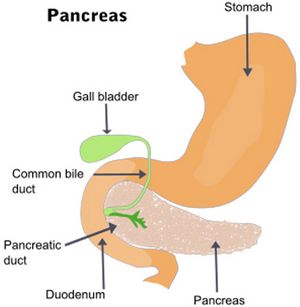 Courvoisier’s (koor-vwah-zee-ayz) law states that ‘a palpable non-tender gallbladder in the presence of jaundice is unlikely to be due to gallstones’. It usually indicates a neoplastic stricture obstructing the distal common bile duct. A palpable gallbladder due to stones is usually tender i.e. due to acute cholecystitis.

A gallbladder containing stones is likely to have been chronically diseased and subject to repeated, although possibly subclinical, episodes of cholesytitis. This results in extensive fibrosis of the gallbladder wall which is then unable to distend when obstructed. A contracted gallbladder is consistent with obstruction above the level of the cystic duct insertion

The converse of this law is not true; the cause of jaundice in non-palpable gallbladder is not necessarily gallstones as 50% of dilated gallbladders are not palpable.

4. Bile duct obstruction due to ascaris 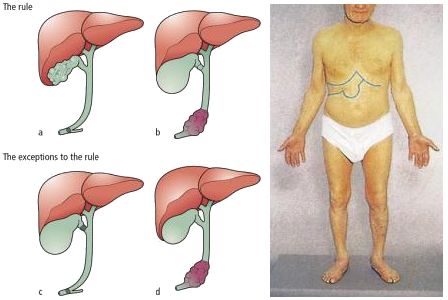 4. Periampullary carcinoma in patients with cholecystectomy

5. Mirizzi syndrome: A stone is lodged in Hartman’s pouch causing intense inflammation in the region of Calot’s triangle and compressing the common hepatic duct, while also obstructing the gall bladder; this causes the gallbladder to distend.

The combined dilatation of pancreatic and common bile ducts is known as double duct sign and occurs most commonly in malignancy of the head of pancreas.