Before undergoing oxidation, fatty acid must be activated first by conversion into Acyl-CoA by the action of Fatty Acyl-CoA synthase (thiokinase).

It occurs in hepatocytes, myocytes, adipocytes.

Carnitine (produced from lysine in liver and kidney cells) is added to activated FA (acyl-CoA) in the intermembrane space of the mitochondria by Carnitine Palmitoyl Transferase-1 (CPT-1).

Acyl-Carnitine is transported into the matrix by crossing the innter mitochondrial membrane by the carnitine transporter (Carnitine Acyl carnintine translocase).

In the mitochondrial matrix, carnitine is exchanged for CoA by CPT-2 and acyl-carnitine is changed back to acyl-CoA (activated FA). 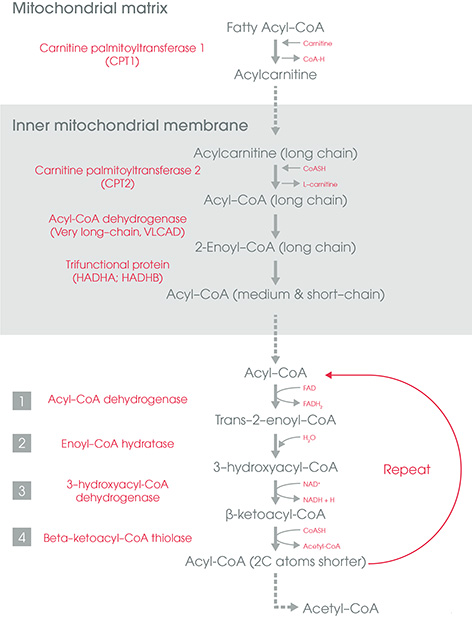 It is the reversal of FA synthesis. 1st step is catalyzed by one of a family of four acyl-CoA dehydrogenases that each has a specificity for either SCFA, MCFA, LCFA or VLCFA.

At the end of 4 reactions (oxidation, hydration, oxidation and reverse condensation) –