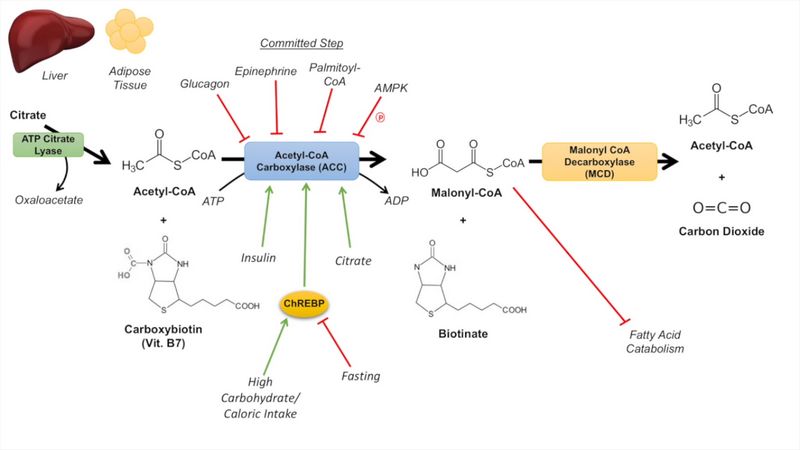 Formation of Malonyl-CoA (3C) from Acetyl-CoA (2C) by Acetyl-CoA carboxylase.

Malonyl-CoA inhibits carnitine acyltransferase to prevent fatty acids from being taken into the mitochondrial matrix to be beta oxidized at times when fatty acids are being synthesized, thus preventing a futile cycle. 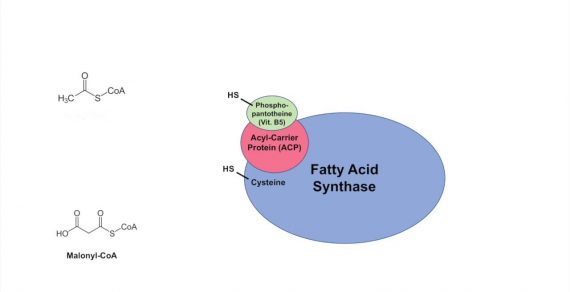 It is a multimeric complex, but the 2 important domains are:

1. Loading of precursors to KAS and ACP end of FA synthase.

6. Acyl chain extended by 2 C atom (donated by Malonyl-CoA) is transferred to KAS end and ACP end is free to receive Malonyl-C0A.

From palmitate, we have elongases which add additional carbons and desaturases which introduce double bonds. Beyond oleate (18:1Δ9), mammals cannot go any further – we can’t introduce double bonds beyond C9, yet we do need some of those. These are essential fatty acids which can be synthesized only by plants and must be obtained in our diet. They are essential for instance for making arachidonate.

Elongation, starting with stearate (18:0), is performed mainly in the ER (microsomal system requiring oxygen i.e. aerobic process) by several membrane-bound enzymes. The enzymatic steps involved in the elongation process are principally the same as those carried out by FA Synthase.

Mitochondrial fatty acid elongation (anaerobic pathway) is essentially a reversal of beta-oxidation, except that one NADPH and one NADH are required (beta-oxidation yields two NADH). Mitochondrial fatty acid elongation acts primarily on fatty acyl CoA substrates shorter than 16 carbons. Pyridoxal-phosphate is required as a coenzyme. It is favored by high NADH/NAD ratio.