Origin of the word “apoptosis”:

Activation of Initiator of Extrinsic Pathway

Activation of Initiator of Intrinsic Pathway

DNA damage or Loss of hormonal stimulation leads to: 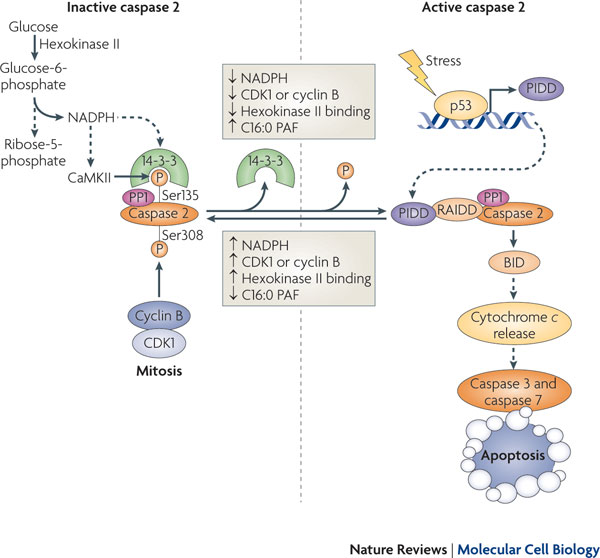 Caspase-9 binds to Apoptosome and gets activated

Along with cytochrome C, other proteins that leak from mitochondrium are:

Phagocytosis of apoptotic cells occur before it leaks out and mediate inflammation, primarily by 2 mechanisms:

For a greater detail – view the apoptosis map in humans.

Anti-apoptotic ligands, including growth factors and cytokines, activate Akt and p90RSK. Akt inhibits Bad by direct phosphorylation and prevents the expression of Bim by phosphorylating and inhibiting the Forkhead family of transcription factors (FoxO). FoxO promotes apoptosis by upregulating pro-apoptotic molecules such as FasL and Bim.

Morphology or Histological Changes of Apoptosis

4. Estimation of Annexin V (apoptotic cells express phosphatidylserine on the outer layer of plasma membrane because of which these cells are recognized by the dye Annexin V. Some cells also express high concentration of thrombospondin).