This is an ECG from a patient who came with a complaint of palpitation:

Now, look for P waves – There are no P waves

Flutter waves in regular SVT are characteristic of Atrial flutter.

AV nodal SVT can be:

AVNRT is the commonest cause of palpitation in patients with structurally normal heart. 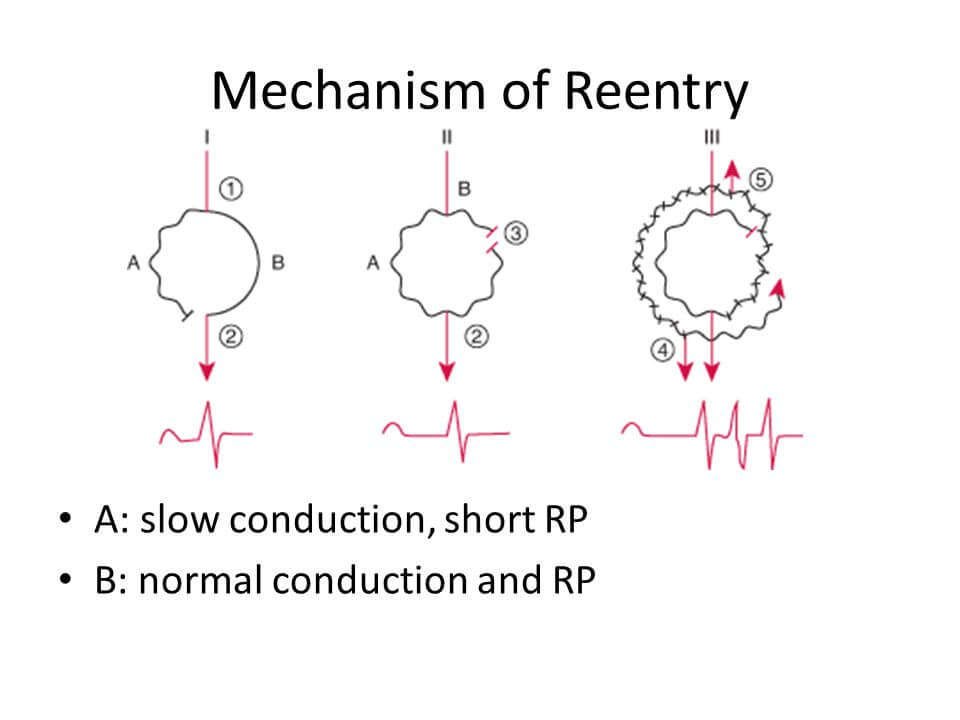 In the above figure:

I – Normal sinus rhythm: Impulse is transmitted via normal (fast) pathway and impulse through slow pathway meets the refractory period of fast pathway – hence, the impulse in slow pathway is not conducted.

This is the mechanism for typical AVNRT (slow-fast AVNRT) which accounts for 80-90% of AVNRT.

Acute Treatment of AVNRT as per ACC guidelines 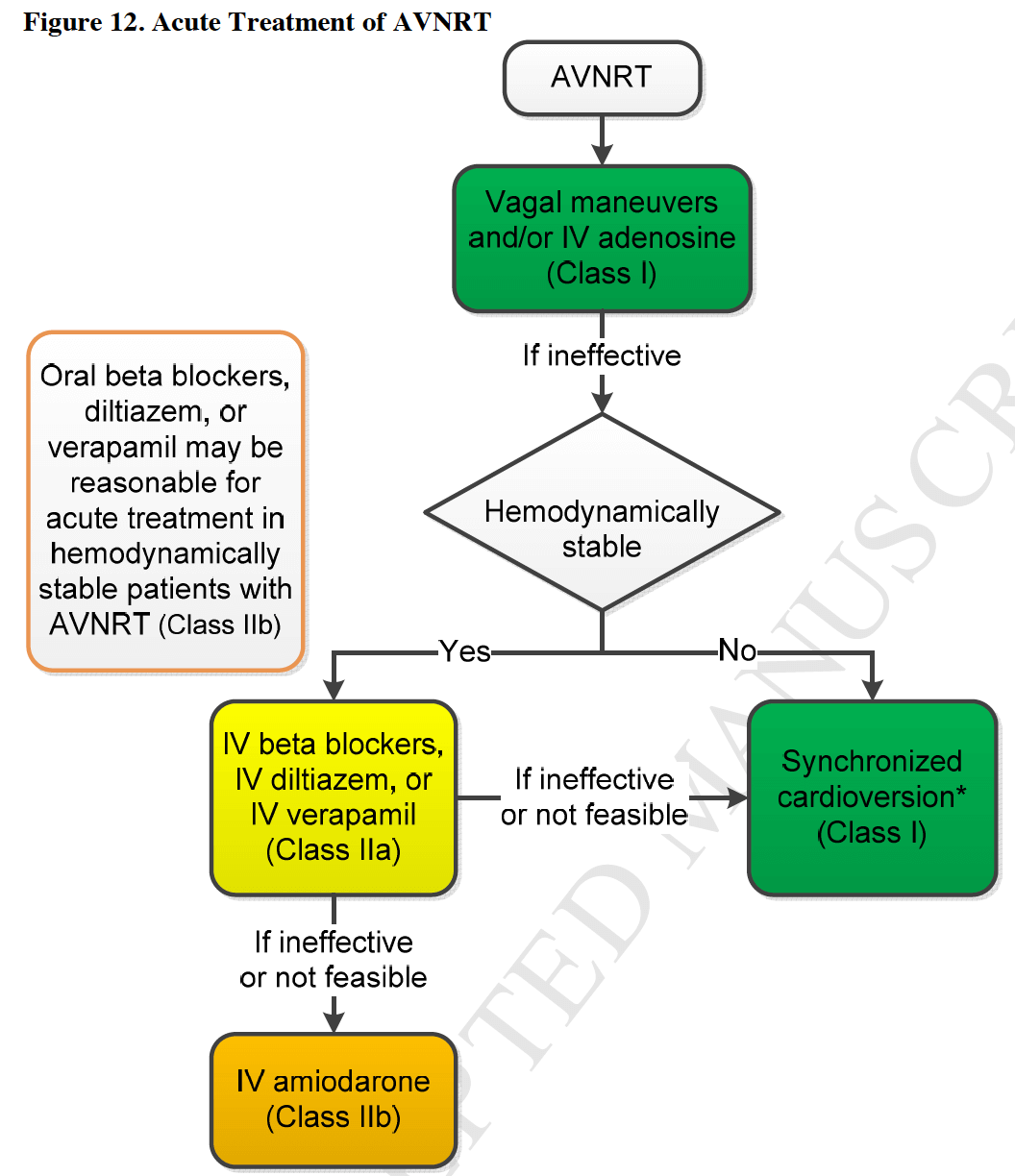 Note: For any iv medication, infusion should be stopped as soon as the arrhythmia is terminated or in the event of sustained or non-sustained VT or marked prolongation of QTc. Patients should be observed for atleast 4 hours after infusion or until QTc has returned to baseline.

Initial dose: 6 mg rapid IV bolus (injected into IV as proximal or as close to the heart as possible), administered over 1-2 s, followed by rapid saline flush.

Subsequent or maintenance dose: If no result within 1-2 minutes, 12 mg rapid IV bolus; can repeat 12 mg dose 1 time. The safe use of 18 mg bolus doses have been reported.

Mechanism of adenosine in AVNRT

Activation of adenosine A1 receptor results in activation of outward potassium current. This effect of adenosine hyperpolarizes the cell membrane to a value approaching Ek (Equilibrium potential of K+). Because atrial and ventricular tissue already rests near Ek, adenosine has little or no effect in these tissues. However, in SA and AV nodal tissue, adenosine hyperpolarizes the cell, reducing the likelihood of firing an action potential, thus slowing or blocking conduction. Adenosine also slows nodal conduction by inhibiting ICa through reducing 3′,5′-cAMP. 1Cardiac Anesthesia: Principles and Clinical Practice edited by Fawzy G. Estafanous, Paul G. Barash, J. G. Reves

It has been reported to precipitate severe bronchospasm in patients with pulmonary disease. The drug is therefore contraindicated in asthmatic subjects and should be used with caution in patients with chronic obstructive pulmonary disease. Nevertheless, true bronchospasm is rare and should be distinguished from the much more common occurrence of dyspnea, only as a symptom and without respiratory compromise, which is benign and transient. Aminophylline (an adenosine antagonist) can be used to revert the bronchospasm caused due to aminophylline.

Caution has to be exercised when using adenosine due to a potential proarrhythmic effect stemming from a transient increase in vulnerability for AF.

If hypotension is a consideration, a slow infusion of diltiazem (2.5mg/min) or verapamil (1mg/min) for upto 20 minutes may lessen the potential for hypotension.

Chronic Treatment of AVNRT as per ACC Guidelines 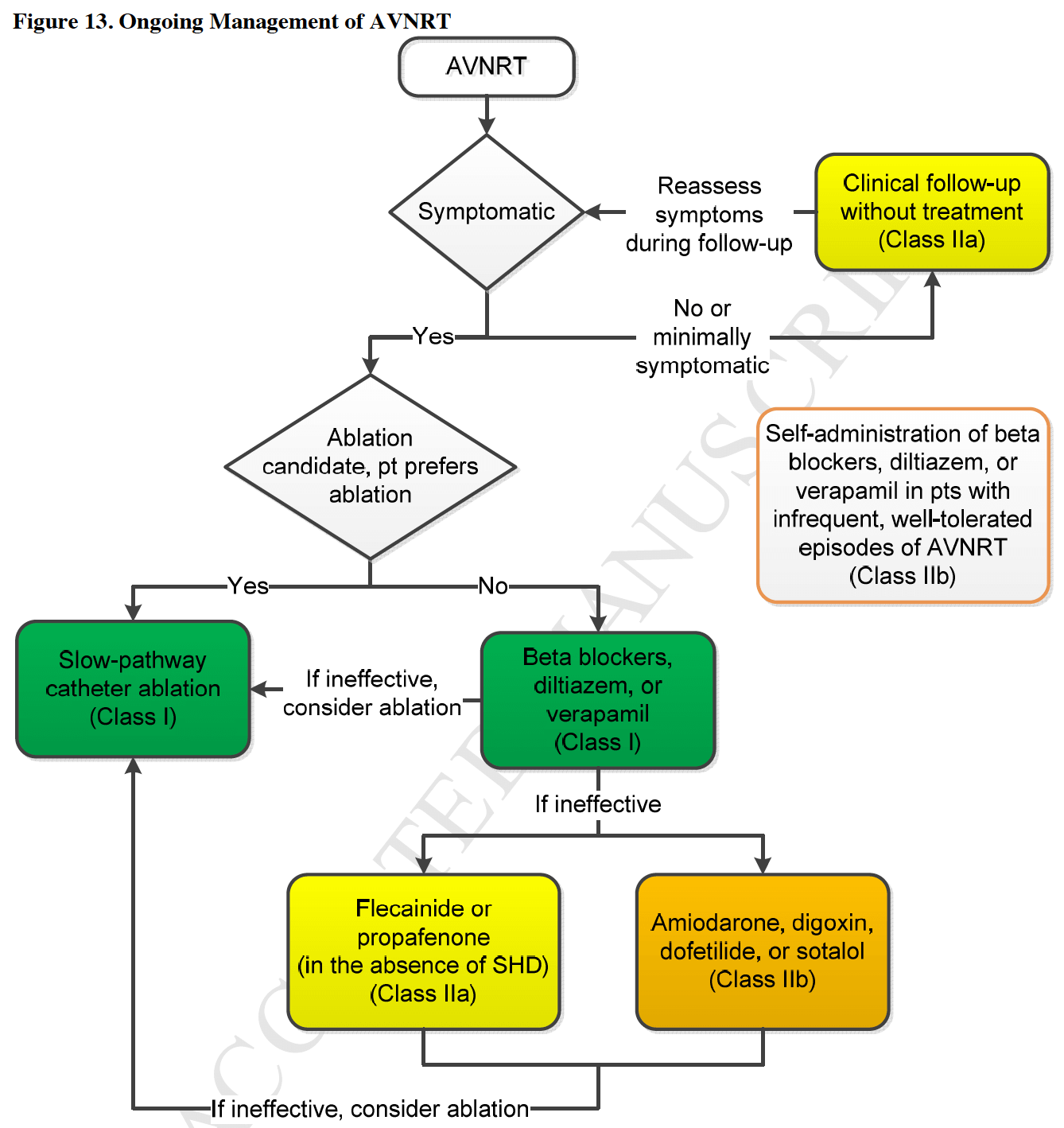 Can these inverted T waves be associated with AVNRT?

In a study of patients greater than 45 years of age with PSVT, 21 of 39 patients had atleast 1 mm of ST depression. Of these 21 patients, only 7 had significant coronary artery stenosis on coronary angiography.

In a study of 63 patients with PSVT, 25 patients had new T inversions within 6 hours. Of these only 2 had confirmed CAD.2Critical Decisions in Emergency and Acute Care Electrocardiography edited by William J. Brady, Jonathon D. Truwit