Shown by: Influenza A and B viruses

Mechanism: Expression of a new allele of hemagglutin or neuraminidase through the following mechanism –

Gives rise to: Pandemics and Epidemics

Shown by: Influenza A virus

Maximum Normal ESR and CRP for age and gender 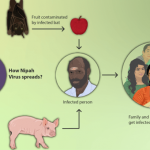