While we have more sophisticated radiological techniques of examination of the mastoids, the ability to read an X-ray of mastoid is a must for the undergraduate students of the medicine. While describing an X-ray in ENT or Otorhinolaryngology, you need to comment on these points:

And when reading an X-ray of mastoid, never forget to comment on the following points:

The adult temporal bone is made up of squamous, mastoid, petrous and tympanic parts. The standard projections for the radiographic examination of mastoid include:

In schuller’s view, there is superimposition of External Acoustic Meatus (EAC) and Internal Acoustic Meatus (IAM) due to the angulation of the X-ray beam. This angulation is provided to separate the right and left mastoid. This angulation also displaces the arcuate eminence of the petrous bone downward showing the key area i.e. antrum and upper part of attic area which is not clearly seen in the Law’s view. This is how, Schuller’s view differs from the Law’s view.

Some radiological signs in mastoid conditions:

4. Cholesteatomas: Cholesteatomas are radiolucent and can only be diagnosed if they erode bone. An erosion of mastoid antrum is seen as an area of translucency in a sclerotic mastoid.

Citelli’s angle or sinodural angle is the angle between the sinus plate and the dural plate. This angle is acute in primary sclerosis but obtuse in secondary sclerosis i.e. Chronic Suppurative Otitis Media (CSOM). 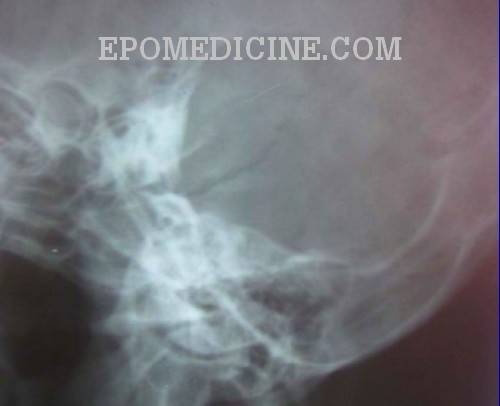 4 Viewpoints 💬 on “X-ray of Mastoids”