Everyone must be aware of the normal visual pathway and their defects. Here, I’ve tried to enlist the topics related to the visual pathway that are “nice to know” but you may have missed it or failed to understand properly. Below is the basic visual pathway:

After the nasal retinal fibers cross in the optic chiasma, and before projecting down the optic tract:

Before crossing in the optic chiasma:

Lesion of optic nerve just anterior to the optic chiasma –

Lesions of optic tract just posterior to the optic chiasma –

Remember: Macular fibers that cross do so in the central and posterior portions of chiasma.

Grey matter is split into 6 parts by the white matter. 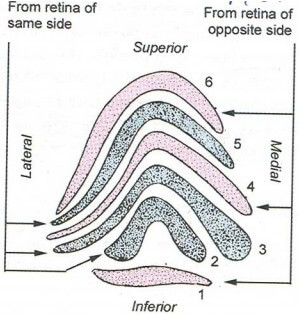 They divide into parvocellular and magnocellular subtypes.

These fiber pass through retrolentiform part of internal capsule. 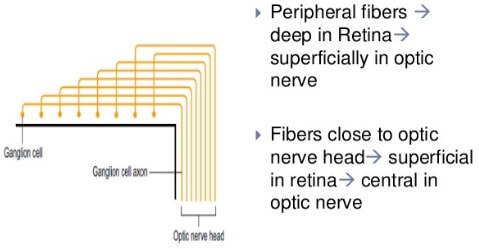 Everyone probably knows this defect. It is the defect seen in optic tract lesion which receives crossed nasal fibers and uncrossed temporal fibers:

Defect in lesions anterior to LGB.

Normal in lesions of LGB and pathway posterior to it (i.e. optic radiations and cortex).

Near reflex: Comprises of –

Unlike in the light reflex, projections are from the supranuclear level (corticonuclear fibers from frontal eyefield) in near reflex. 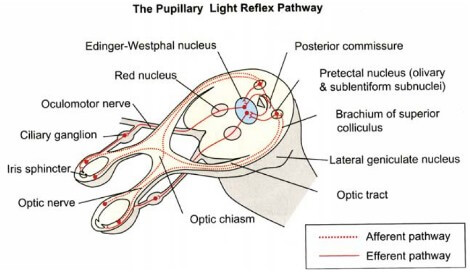 This is a condition when light reflex is absent and near reflex is present.

For near-light dissociation to be present:

The consensual light reflex is mediated by the internuncial fibers from pretectal nucleus to bilateral E-W nucleus. Hence, afferent lesions around this region gives rise to near-light dissociation because the afferent fibers of near-reflex that enter E-W nucleus more rostrally in midbrain and are spared.

In transtentorial (uncal) herniation, due to mass effect there is compression of the contralateral crus cerebri of midbrain against the free edge of tentorium cerebelli. This is known as Kernohan’s notch. This may also put pressure on the ipsilateral CN III and posterior cerebral artery. The neurologic defects in this setting are: 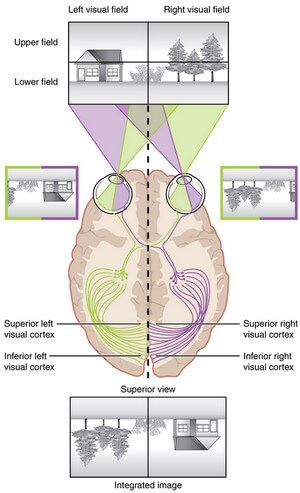 The visual field projects onto the retina through the lenses and falls on the retinae as an inverted, reversed image. The topography of this image is maintained as the visual information travels through the visual pathway to the cortex. 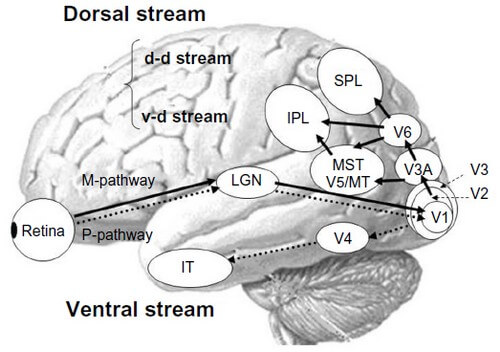