Many students feel that, this is one of the most difficult to explain topic in Immunology. Here, we will try to explain the process and clinical relevance of V(D)J or Somatic recombination in simple and interactive way.

Humans only have about 25,000 genes.  Since, an antibody made to bind one antigen cannot bind to the other, we need (and we do have) around 100 millions of different antiboies to bind to different antibodies (to protect us from every possible invaders). This antigen specificity of antibody is called idiotype and is determined by the “Variable” terminal of the immunoglobulins. So, if each heavy or light chain protein were encoded by a different gene – how can we produce 100 millions of antibodies from just 25,000 genes.

There are 4 mechanisms in which B cells generate receptor diversity: 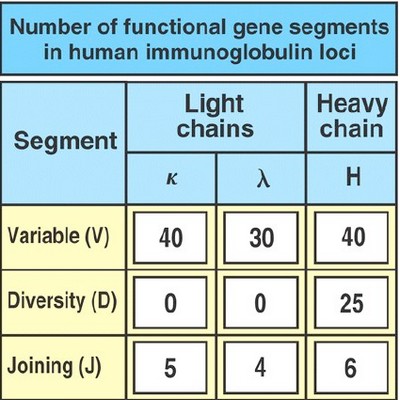 Before we proceed with discussion of somatic recombination, make sure that you know:

For generation of B cell receptor diversity, we are concerned with the “V” region of antibody here.

This is because it occurs in the somatic cells and not the germline cells.

Germ-line DNA on Progenitor B cells provide H and L chain locus – directing the synthesis of Heavy and Light chain respectively. They have V, (D) and J segments in un-rearranged form.

VDJ rearrangement occurs during the maturation of B cells.

After the re-arrangement, the B cells are now called Immature B cells.

Trascription of Immature B cell DNA to RNA followed by RNA splicing of introns occur. This brings the Combined V(D)J together with “C” segment that encodes for Constant region of heavy or light chains and forms mRNA.

This is followed by Translation to produce proteins – specific heavy chain and light chain.

Now, let us simulate a card game between player no. 14 from two different teams (chromosomes). 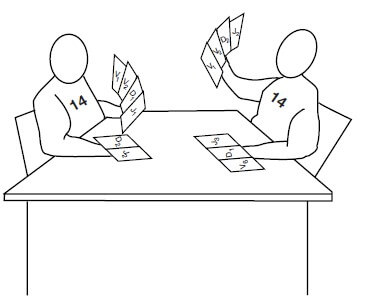 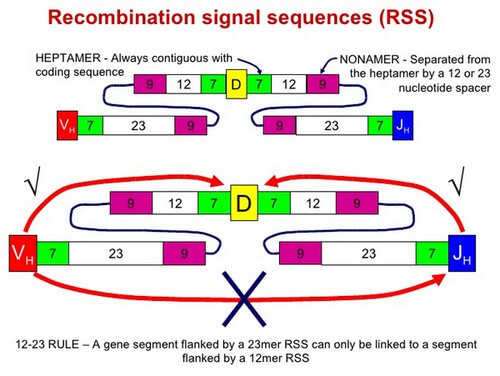 The configuration prouced by RSS acts as a target for Recombinases. These are recognized by two proteins encoded by two Recombination Activating Genes:

The RAG-1 and RAG-2 proteins cut through both strands of DNA at the RSS forming double-stranded breaks (DSBs).

The cut ends are stitched together (ligated) to form:

Other Mechanisms of Generating Diversity

When does it occur?

This generates even more diversity than the random combination of V, D and J segments alone.

When does it occur?

What does it do?

Where does all this happen?

Isotype switching: This phenomenon is opposite of Somatic hypermutation. During class switch recombination, exchange of one constant region for another occurs, but the heavy chain variable region remains same. This allows effector function of antibody molecule to be changed while maintaining antigen binding. 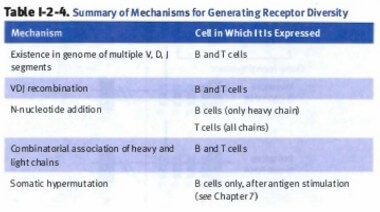 In contrast to B cells,