Definition: Breathlessness inappropriate to the level of physical exertion or even occurring at rest (subjective and not a sign)

Peripheral: Carotid and aortic bodies (to pO2, pCO2 and H+)
Central: Medulla (to pCO2, not pO2, change in pH of CSF)

a. Increased work of breathing:

Corollary discharge: When the CNS voluntarily sends a signal to the respiratory muscles to increase the work of breathing, it also sends a copy to the sensory cortex telling it there is an increased work of breathing. 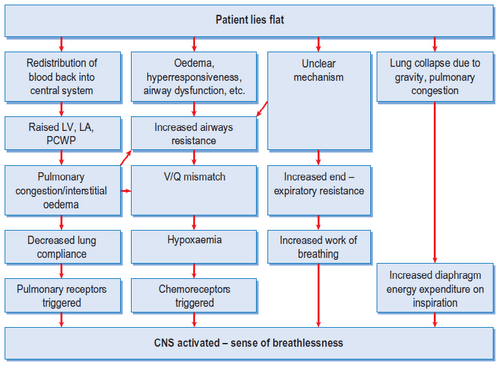 Paraoxysmal nocturnal dyspnea: Decreased responsiveness of respiratory center in brain and decreased adrenergic activity in myocardium during sleep and pulmonary congestion 2-5 hours after onset of sleep 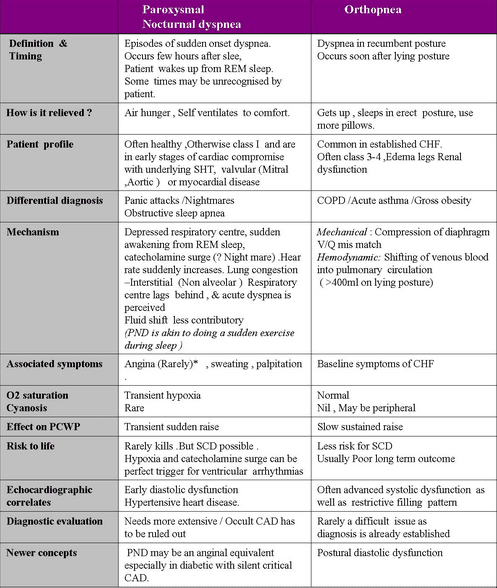 Trepopnea: Dyspnea worse when lying on one side and relieved by lying on opposite side

Platypnea: Dyspnea on sitting or standing and relieved by supine position

a. Onset and Duration: Can ask when able to run upstairs?

b. Severity: How far before stopping? How any flights of stairs? At rest? Sleep? Talking? Dressing?