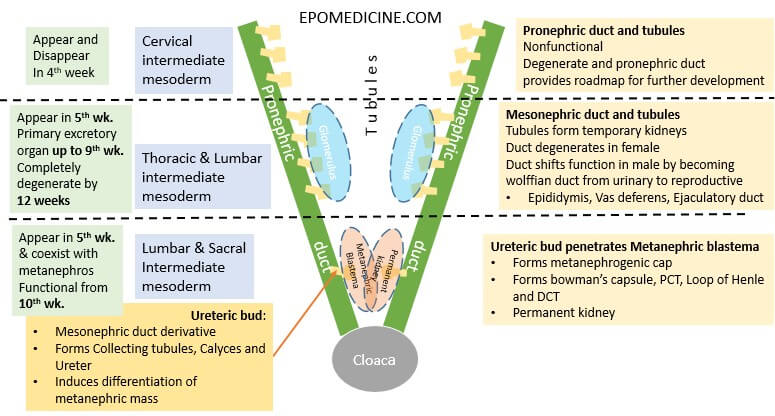 Remember the embryology of brain – from cranial to caudal, the primordial structures are prosencephalon, mesencephalon and metalencephalon. Similar terminologies will be used here with replacement of “encephalon” with “nephros”.

WT1 expressed by the mesenchyme, makes metanephric blastema competent to respond to induction by the ureteric bud. PAX2 promotes condensation of the mesenchyme preparatory to tubule formation, while WNT4 causes the condensed mesenchyme to epithelialize and form tubules

Fetal urine is excreted into amniotic sac, where it is swallowed and recycled – Contributes to amniotic fluid volume.

Placenta, not the fetal kidney is responsible for excreting the wastes.

Uretero-pelvic junction is the last to canalize and commonest site of obstruction in congenital hydronephrosis.

Ascent and Rotation of Kidneys

The last segments of the ureter to gain a lumen are at either end (kidney or urogenital sinus).

Duplication of the urinary tract

They can arise due to a variety of factors:

The interaction of polycystin-1 and polycystin-2 in renal tubules promotes the normal development and function of the kidneys.

Due to peristence lumen of allantois, they are found along the midline on a path from the umbilicus to the apex of the urinary bladder (i.e. along median umbilical ligament) –

2. Trigonitis: As a mesonephric duct derivative, the trigone is sensitive to sex hormones and can undergo hormone-induced epithelial metaplasia (usually transformation from a transitional type to squamous type epithelium which can overproliferate and lead to urinary blockages).