5 mesenchymal prominences (facial primordia) appear in relation to the stomodeum (a depression in the surface ectoderm which marks the future mouth and oral cavity):

Proliferation of mesenchyme from frontonasal process around the opening of nasal pits form: medial and lateral nasal prominences.

Nasal pits continue to deepen until they:

By the end of 5th week – oronasal membrane ruptures into posterior choana establishing communication between oral and nasal cavities.

The prominences begin to fuse with eachother.

Labiogingival laminae (ectodermal ingrowth) along the edge of upper jaw: 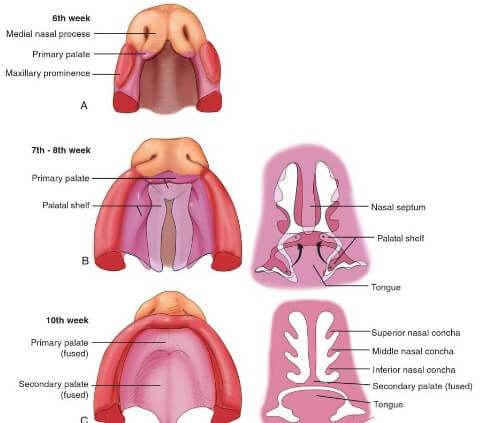 Palatal shelves merges with each other and secondary nasal septum in the midline to form definitive or secondary palate.

Fusion of processes on the face completes. 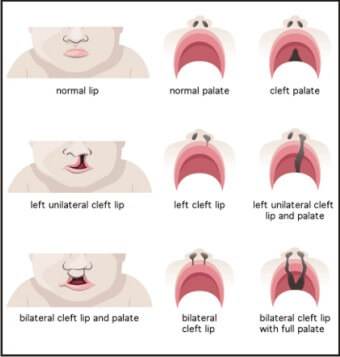 Failure of the embryonic facial prominences to fuse properly –

Unilateral cleft lip:  results from failure of the maxillary prominence to merge with the medial nasal prominence on the affected side

Bilateral cleft lip (Hare lip): results due to failure of maxillary prominences to meet and unite with the medial nasal prominences on both sides

Oblique facial cleft: results from failure of the maxillary prominence to fuse with the lateral nasal prominence.

Posterior cleft palate (posterior to incisive foramen): palatine shelves fail to fuse with each other and secondary nasal septum

Anteroposterior cleft palate: Combination of both the anterior and posterior defects 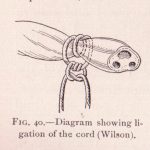 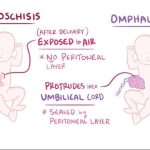