Nipah virus is closely related to, but distinct from Hendra virus.

Maximum Normal ESR and CRP for age and gender 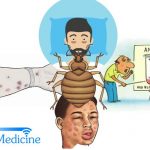