Second week is the week of twos. In third week trilaminal germ disc is formed. And now, here I have attempted to fit the fourth week in development of embryo as the week of fours.

Four folds of the embryo

It forms four folds: 2 lateral, cranial and a caudal fold.

The closure of the caudal neuropore marks the completion of neurulation and divides neuropore into 4 divisions:

Optical vesicle (future optic nerve, retina, and iris) forms at the basal plate of the prosencephalon.

Neural crest cells: The neuroectodermal cells from lateral part of neural plate detaches and are called neural crest cells. These cells form crests above the neural tube (remember the crest of feathers in the logo of World Health Organization).

The primitive gut is formed in the 4th week by the incorporation of endoderm of dorsal yolk sac into the developing embryo. It extends from stomodeum to cloaca and consists of 3 parts: foregut, midgut and hindgut.

During the 4th week of gestation of the respiratory diverticulum, appear as a ventral outgrowth of the foregut endoderm. 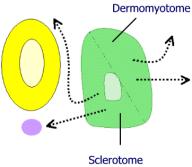 Somites are mesodermal mass around the neural tube that arises from the paraxial mesoder. It hast 4 compartments: