Let’s go back to the 4th week during the development of heart. The primitive intraembryonic coelom forms in the lateral and cardiogenic mesoderm during 4th week of development.

Like the heart fields, the intraembryonic coelom has a horse-shoe configuration during this period:

A thick mesodermal plate called “septum transversum” lies cranial to the pericardial cavity during this period, before the folding of the embryo.

Folding of the embryo

The embryo undergoes 2 foldings during the 4th week:

Due to the folding, coelom descends caudally below the developing brain:

All these cavities are in communication with eachother.

By the end of 4th week, future pleural cavities are still in communication with the pericardial cavity and peritoneal cavity.

At 4th week: Septum transversum lies opposite to C3-C5

By 8th week: Dorsal part of diaphragm lies at the level of L1.

Which structures derive which part of diaphragm ? 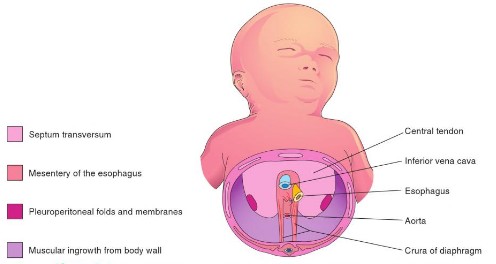 Timeline of Diaphragm Development or Embryology

There are 3 types of CDH: