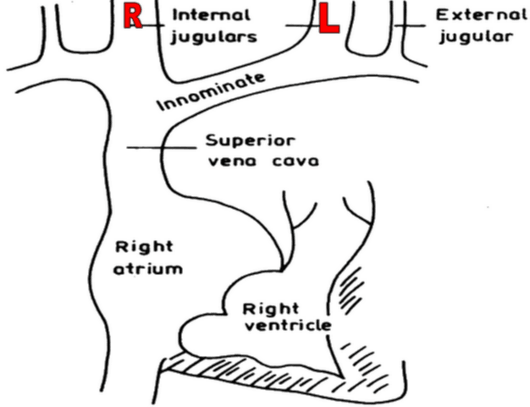 1) Position: Semi-reclining position with 45° angle between the trunk (not the neck) and the bed. Then, turn the head slightly towards left shoulder, so that the neck muscles are relaxed. 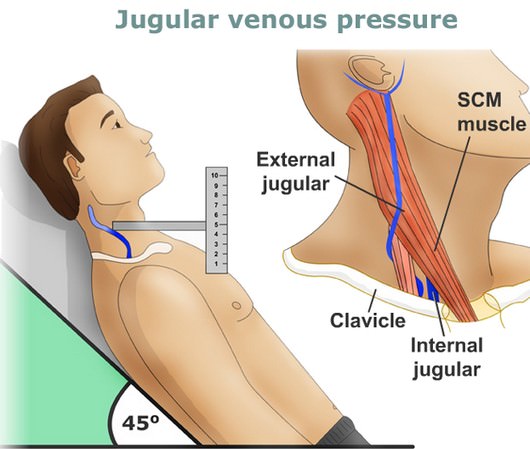 Do not mistake the carotid pulsations for venous pulsations.

This can be done by using 2 rulers – one placed horizontal to the upper level of pulsation and another taking the vertical distance of that ruler from the sternal angle. 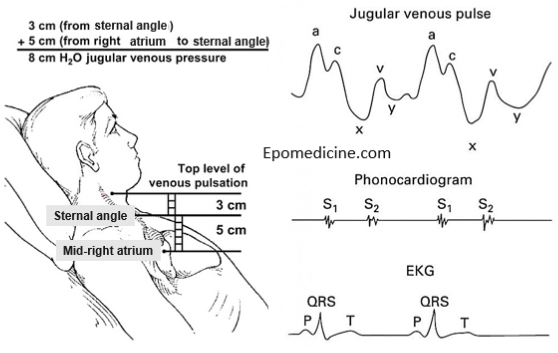 The best way to identify the waves (ascents and descents) would be to simultaneously auscultate and observe the wave pattern.

Note: h wave – between the bottom of ‘y’ descent and beginning of ‘a’ ascent, during the period of diastasis (relatively slow ventricular filling).

Normal: Venous column rises during expiration and falls during inspiration

Reason: During inspiration venous return to the right side of the heart increases due to increased negative thoracic pressure. However, this is accommodated by the inspiratory decrease in pulmonary vascular resistance. As a result, pulmonary artery, right ventricle and right atrial pressures fall inspite of increased venous return. During expiration, due to increased positive intrathoracic pressure, pulmonary circulation is compressed by the thoracic cage resulting in increased pulmonary resistance and pressure.

Technique: When pressure is applied over the liver by pressing firmly below the right costal cartilage margin f0r 30 seconds, the venous pressure gets exaggerated initially due to increased venous return. Later the myocardium accomodates the extra venous return and the level falls.

This test also helps to differentiate venous pulsation from the arterial pulsation.

In an infant, the liver is the only guide to the recognition of elevated right atrial pressure as the JVP is difficult to delineate.

Mnemonic: PaY TaX (Remember: X descent is prominent in both) 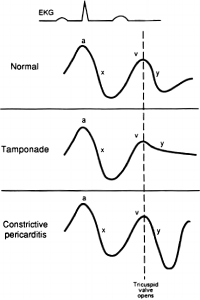 Pericardial pressure is distributed equally among all chambers since pericardial fluid is free flowing. This reduces the gradients between chambers throughout diastole. This is inconsequential in small effusions, but becomes hemodynamically significant in large effusions in which a greater pressure in the pericardium is transmitted to all four cardiac chambers resulting in “equalization of central pressures”. The reduction of the pressure gradient between the atria and the ventricles when the AV valves open mean that there is less transfer of blood from the atria to the ventricles. This is seen as a loss of the y-descent of the CVP or PCWP waveform tracings.

– In contrast, the thickened pericardium in constrictive pericarditis does not restrict chamber enlargement at low volumes and therefore does not impair early diastolic filling but at higher volumes the limiting constraint is reached and filling is limited and the pressures in all chambers will become equal. Filling is preserved in early diastole but compromised in late diastole.