Definition: Leprosy is a chronic granulomatous disease, caused by Mycobacterium leprae which affects prinicpally the skin and  peripheral nerves. Other commonly affected sites are the cooler parts of the body like mucosa of upper respiratory tract, anterior chamber of eyes and testes. The cooler parts affected in skin are ear lobules and extremities.

1. Infectious agent: Mycobacterium leprae – Acid and Alcohol Fast (AFB), gram positive, obligate intracellular, non-cultivable bacilli which has been successfully inoculated and has multiplied in the mouse foot pad, thymectomized irradiated mice, mude mice and 9-banded armadillos. The organisms have high affinity for Schwann cells and the cells of reticuloendothelial system. It has high infectivity but low pathogenecity. It has a doubling time of 2 weeks.

3. Reservoir: Humans are the only reservoir of proven significance

5. Period of communicability: 1 month to 20-30 years but adequate treatment with clofazimine and dapsone renders the patient non-infectious in 3 months and with rifampicin in 3 days.

6. Susceptibility and resistance: Everyone is susceptible to infection, however children aged between 5-9 years are at the greatest risk. More than 95% of the adults are resistant to the infection. Subclinical infections occur more commonly in endemic areas, but clinical disease manifests in only a small fraction having specific impairment to Cell Mediated Immunity (CMI) to M. leprae.

2 terms need definition when we discuss control strategies in leprosy: 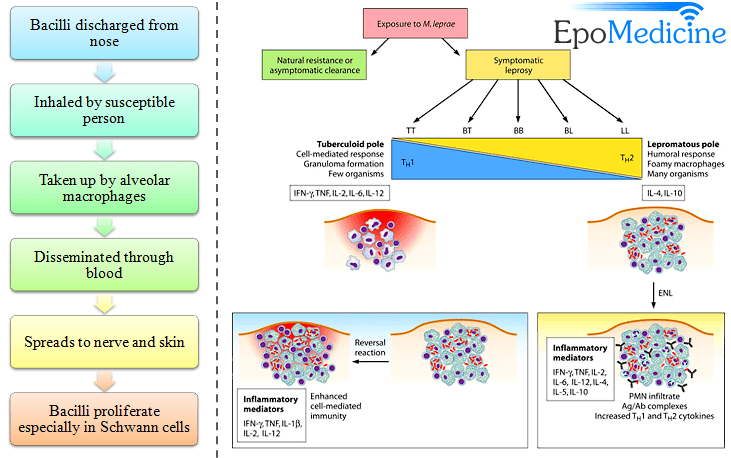 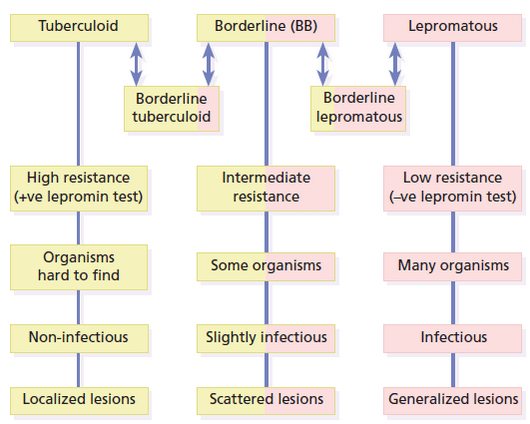 Leprosy is classified within two poles of the disease with transition between the clinical forms. Clinical, histopathological, and immunological criteria identify five forms of leprosy:

1. Indeterminate leprosy (I): It is a prelude to the determinate forms of leprosy. It is usually seen on face of children, in endemic areas. The lesion is always a macule; ill defined, atrophic, hypo/normo-esthetic, hypopigmented or slightly erythematous with or without nerve thickening.

2. Polyneuritic leprosy: These manifests with only neural signs without evidence of skin lesions. The affected nerves are tender and/or thickened. Localized involvement of the nerves may form nerve abscesses.

3. Histoid leprosy: It is regarded as a distinct variant of Lepromatous Leprosy (LL) characterized by presence of well demarcated, juicy cutaneous and subcutaneous nodules, present on normal looking skin primarily over back, face, buttocks, bony prominence. It may occur as a primary manifestation of disease or following inadequate dapsone therapy.

4. Lucio leprosy (LuLp): This variant is rare outside Mexico, Costa Rica and Gulf coast. It manifests as slowly progressive, diffuse, shiny infiltration of skin of the face and most of the body (lepra bonita, beautiful leprosy). There is loss of eyebrows, hoarseness of voice with myxedema like features. This form of disease is liable to develop Lucio phenomenon or reaction – regarded as a severe form of Erythema Nodosum Leprosum and characterized by destructive vasculitis leading to skin necrosis and ulcers.

Atleast 1 sign is needed to diagnose leprosy. If the diagnosis is doubtful, individuals must be counselled and advised to follow up or referred to higher centers if signs persist or worsen in 6 months duration.