A 12 year old female patient came to OPD with the chief complaints of increased thirst and increased frequency of urination for last 1 year. She drank about 10-11 liters of water everyday and passed similar amount of urine with a frequency of 10-12 episodes on daytime and 3-4 episode on night time. This had been going on for the last 1 year with no improvements despite many hospital visits. Due to frequent urination, she was less attentive in classes and her academic performance was deteriorating according to her teacher.

There was no history of:

There was a history of headache about 1 and 1/2 year back which was gradual in onset and generalized but non progressive and was evaluated in hospital. She was found to have papilledema the cause of which could not be ascertained and she was better with symptomatic medication.

Central diabetes insipidus (CDI) is the end result of a number of conditions that affect the hypothalamic-neurohypophyseal system. 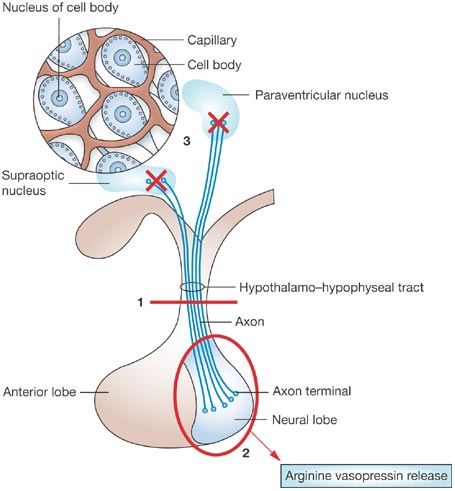 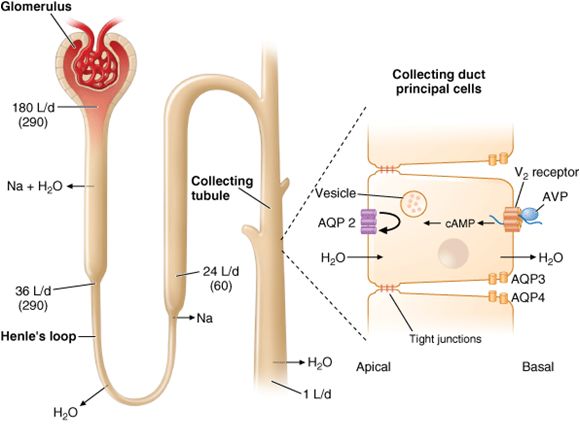 National Surveillance of Central Diabetes Insipidus (CDI) in Denmark – Results from 5-years Registration of 9,309 Prescriptions of Desmopressin to 1,285 CDI patients.

Although the signs and symptoms of DI vary with the etiology, it manifests differently in different age groups depending on their ability to replenish water.

MRI pituitary is an important tool for assessment of etiology of CDI, and should always be performed after gadolinium injection, to check for abnormal enhancement within the stalk. It is also important to perform MRI after the patient is well hydrated as the intensity of posterior pituitary bright signal is inversely related to the degree of dehydration. MRI findings have been heterogenous:

Autoimmunity: Circulating vasopressin-cell autoantibodies (AVPc- Abs) have been detected in 23%-75% of young patients with CDI, indicating that autoimmune CDI might account for a significant number of the idiopathic cases. However, circulating AVPc-Abs were also frequently measured in patients with non-idiopathic CDI, demonstrating that AVPc-Abs are not reliable markers of an autoimmune etiology.

Abnormal blood supply: Abnormal blood supply to the posterior pituitary gland was also evidenced in patients with idiopathic CDI, suggesting that selective vascular damage affecting the inferior hypophyseal arteries can be associated with the pathogenesis of CDI.

Vasopressin and its analogue:

Desmopressin (1-deamino-8-D-arginine vasopressin, dDAVP) is the current drug of choice for long-term therapy of CDI. This synthetic analogue has more specific antiduretic action, negligible pressor activity and a longer half life than the native molecule. It can be given parenterally, orally, or intranasally.
The recommended dose of dDAVP is:
100- 1200 μg /day in three divided doses orally;
2-40 μg once or twice a day intranasally; and,
0.1-1 μg parenterally.

There is a large variability in action amongst individuals and hence the duration between doses needs to be determined in each patient.

Dilutional hyponatremia, headache, hypertension and nasal congestion are some of the side effects occasionally seen.
[hr]
Summary: