Definition: Epistaxis is defined as bleeding from the nasal cavity. It ranges from minor blood-tinged mucus when blowing the nose to life-threatening hemorrhage.

Why is the nose prone to bleeding?

Nose is a highly vascular organ with a large surface area secondary to intense heating and humidification requirements which also predispose it to bleeding. The peculiar features of the vascular supply of nasal cavity are:

Arterial supply of the nasal septum: 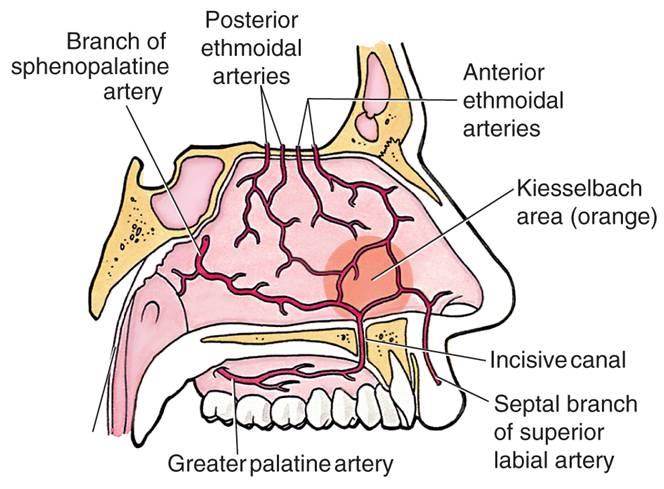 The region above the root of the middle turbinate is supplied by the anterior and posterior ethmoidal arteries, these are branches of the ophthalmic artery (internal carotid), with the remaining areas being supplied by the sphenopalatine, greater palatine and superior labial branch of facial artery (external carotid). The sphenopalatine artery is considered to be the main arterial supply of the nasal cavity and originates from the maxillary artery. The posterior ethmoidal artery may be absent in 30% of noses.

Internal carotid system (Above the root of middle turbinate):

External carotid system (Below the root of middle turbinate):

Venous supply of the nasal septum:

The veins generally follow the arteries, but additional emissary veins connect the venous drainage to the cavernous plexus. A relatively common finding is a prominent retrocolumellar vein that runs parallel to the columella adjacent to the mucocutaneous junction.

Note: Another common site of bleeding is Browne’s area which is situated on the posterior part of the nasal septum.

Classification and Causes of Epistaxis:

A. Primary or Secondary Epistaxis:

B. Adult or Childhood Epistaxis: 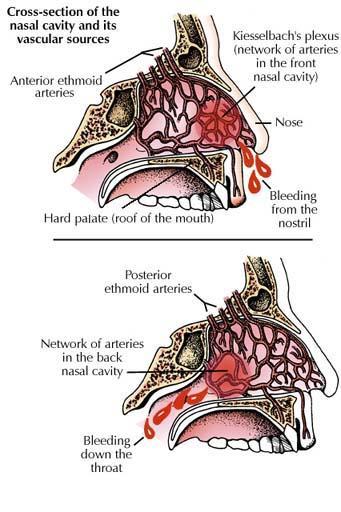 Spaces and Compartments of Hand