A wound is typically described as a break in the surface tissue (such as skin or mucous membrane) or any tissue under the surface. It may involve the superficial planes alone or the deep planes and deep tissue of the body alone or both. Superficial Tissue include: Skin, Superficial Fascia, Subcutaneous Tissue and Mucosa and Deep Tissue include: Muscle, Tendon, Ligament, Bone and Solid Organs.

A wound may be inflicted outside the hospital because of trauma (may be intentional or accidental) or inside the hospital as a part of a surgical procedure (making an incision). Whatever be the etiology of the wound it needs to be taken care of following a certain set of protocols to prevent it to get infected and cause further complications. Considering the different types of causes of injury, the physiology behind the wound getting corrected and healed is similar but with variation in duration, this is due to the character of wound at the time of presentation and procedure followed during treatment which would be explained subsequently.

There are several methods to classify a wound. Few of the classification are mentioned below.

Abrasion, Incision, Laceration, Stab, Puncture, Penetration and Amputation are considered as Open Wounds, whereas Hematoma and Bruise are categorized under Closed Wounds.

A wound, which has been presented to a physician / surgeon since the beginning of time when medicine was being documented, perhaps long before too, is defined as a break in the skin leading to exposure of the underlying tissue.

Since when humans began to explore and started to use instruments to make their work simple, these inventions had a dark side to them.  There were multiple types of wound produced on the body even to such an extent that the overlying skin is not breached but underlying tissue gets damaged.

There are many classifications of wound based on the mode of injury, appearance and bacterial contamination.

Please feel free to add any other classifications of wounds known to you in the comments section below. It would subsequently be added to the write up. Please do mention you Name. 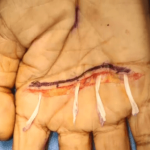