Sickle Cell Disease (SCD) is a hereditary disorder of hemoglobin synthesis caused by a mutation in the globin gene that changes the sixth amino acid from glutamic acid to valine resulting in abnormal sickling (rigid, inflexibled and sickle-shaped) of Red Blood Cells (RBCs) under low oxygen conditions. Sickle cell anemia is the homozygous state for Hb-S gene, while the heterozygous state is known as Sickle cell trait. The orthopedic manifestations of SCD are mainly attributable to the impairment of local circulation due to the clumping of sickle cells. 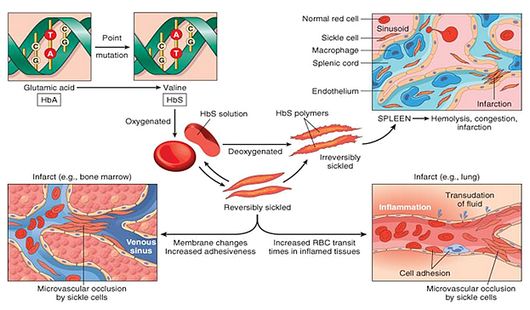 Why are infections so common in Sickle Cell Disease?

Why are Sickle Cell Disease patients susceptible to Salmonella infections? 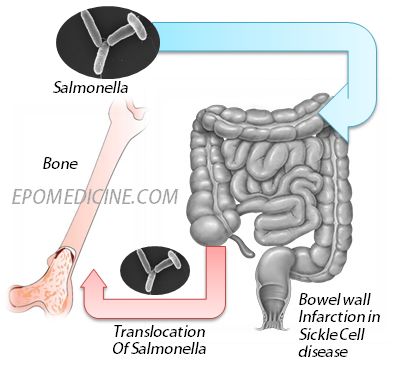 2. Bowel infarction: Blood stream invasion by salmonella is facilitated by devitalisation of areas of bowel wall due to intravascular sickling in the intestinal blood vessels. Areas of infracted bone are then infected by these blood borne organisms.

3. Bone marrow infarction: Expanded marrow in sicklers with its increased oxygen demand and metabolic activity and sluggish circulation is vulnerable to infarction. Devitalised infarcted areas are prone to infection with salmonella which characteristically tend to linger in bone marrow after other sites have become sterile.

4. RES dysfunction: Normally macrophages of the reticuloendothelial system eliminate salmonella from the body. In patients with sickle cell haemoglobinopathy macrophages are loaded with the breakdown products of the RBCs reducing their capacity to ingest and kill salmonella.

Note: While a lot of debate had been going about the commonest etiology of osteomyelitis in SCD (Salmonella or Staphylococcus aureus), many recent studies confirm Salmonella as the winner.

Differential diagnosis: Difficult to differentiate from severe bone pain of vaso-occlusive crisis which is atleast 50 times more common than osteomyelitis in SCD (Ultrasonography, Radionucleide scanning and MRI may be helpful in differentiating as blood culture is usually negative in the 1st 1-2 weeks and the X-ray findings are also non-specific)

Confirmation of diagnosis: Growth of salmonella on culture