Couniaud divided liver into 8 functional segments, each of which is supplied by it’s own portal triad (composed of a portal vein, hepatic artery and a bile duct).

How to remember the orientation of Couniaud Liver Segments?

With the right hand, make a fist while tucking the thumb behind the remainder of the fingers.

For the remaining 7 segmets, go in a clockwise direction starting from the lateralmost upper left part, i.e. Proximal phalax of 1st finger. 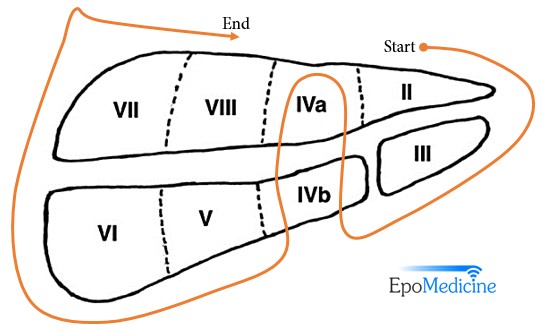 The right portal vein subdivides into anterior and posterior branches.

Right hepatic vein: drains all of segment VI and VII and some of segments V and VIII.

The left lobe is supplied or drained by left branches from porta hepatis components and right from right. The caudate lobe is anatomically different from other lobes:

Caudate lobe is the lobe that is not affected in Budd-Chiari syndrome and cirrhosis of liver because of it’s direct drainage to IVC. For further information about liver diseases and types of diagnostic tests for liver conditions you can visit fibronostics.com.

One Viewpoint 💬 on “Liver Segments Explained with Mnemonic”