A) Ischemic Heart Disease (IHD): It is the imbalance between myocardial oxygen supply and demand, resulting in myocardial hypoxia and accumulation of waste metabolites. The components of IHD are:

B) Stable Angina: Pattern of chronic, predictable, transient chest discomfort during exertion or emotional rest and relieves with rest.

Cardiac Syndrome X: Typical symptoms of angina pectoris without evidence of significant CAD in coronary angiogram – thought to be due to inadequate vasodilator coronary flow reserve. The proposed mechanisms are:

ii. Degree of stenosis: In stable angina, coronary flow reserve is inadequate with >70% of cross-sectional area (equivalent to 50% of lumen diameter by angiography) stenosis – predictable.

Impaired release of endothelial vasodilators by atherosclerosis (e.g. NO and Prostacyclins) leads to: 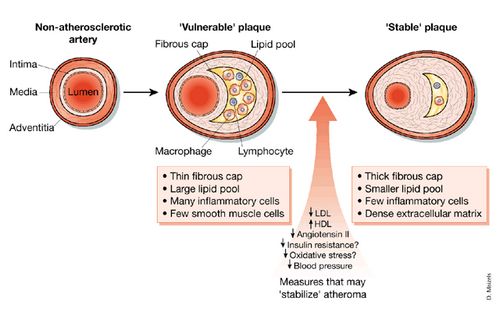 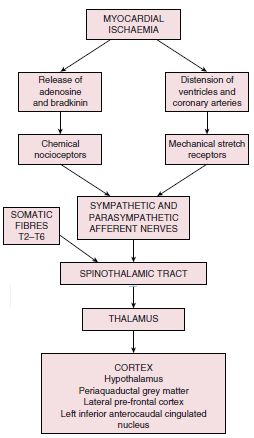 Mechanism of chest pain/discomfort: Metabolic products such as lactate, serotonin and adenosine accumulate locally and may activate peripheral pain receptors in the C7 to T4 distribution.

1. Rapid and full recovery: after a brief episode of angina

A) Early changes in MI (minutes to days):

B) Late changes in MI (days to weeks):

Pathophysiology of Complications of Myocardial Infarction