In patients with mild hyperkalemia, potassium conductance (IKr) through potassium channels is increased, which tend to shorten the AP duration and on the ECG causing tall tented T waves.

a. Atria are more sensitive: Intially, PR prolongation and flattening of P waves

ECG features:
Changes in the T wave provide the earliest clues to hyperkalemia. 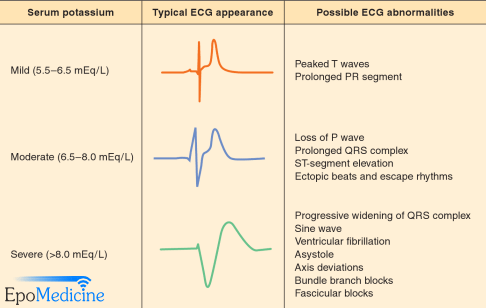 Note: Hyperkalemia causes tall, peaked (tented) T waves. ECG signs may be absent if the onset of hyperkalemia is slow – as seen in chronic renal failure – even though the serum potassium is in the range of 7 – 7.5meq/L.