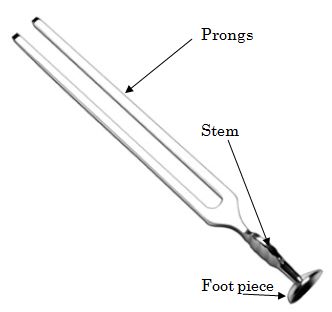 Parts of a tuning fork

How to use tuning fork?

Why tuning fork of 512 Hz is ideal for hearing tests?

Tuning forks of higher frequency have shorter decay time (how fast the tuning fork loses vibratory energy) and are difficult to activate for them to be heard with a moderate or severe sensorineural impairment.

The sound can be transmitted to cochlea in 2 ways:

Note: Direct transmission of the acoustic signal to the cochlea through the skull vibration is 40 dB to 70 dB less effective than the air conduction pathway. Therefore, in the case of a person listening to air-conducted sound with open ears, bone conduction has minimal contribution to auditory perception.

Testing Air Conduction (AC): Hold the vibrating tuning fork 2 cm lateral to the test ear, such that both the prongs vibrate parallel to the acoustic axis

Testing Bone Conduction (BC): Hold the vibrating tuning fork and place the foot piece on the flat surface of mastoid just above External auditory canal (not the mastoid tip)

Note: Sometimes, in testing for loudness AC = BC can be noted and this may indicate mild CHL. Test of duration should be performed to confirm.

This is seen when a patient has severe SNHL on test side and normal hearing on non-test side. On application of vibrating tuning fork to deaf side the sound is transmitted to the non-test ear by bone and patient perceives this bone conduction and presumes that it is perceived by test ear, thus interpreting it as BC > AC.

Principle: This test is useful in identifying unilateral hearing loss. A patient with a unilateral conductive hearing loss (CHL) would hear the tuning fork loudest in the affected ear. This is because the conduction problem masks the ambient noise of the room, whilst the well-functioning inner ear picks the sound up via the bones of the skull causing it to be perceived as a louder sound than in the unaffected ear.

Note: Weber is a sensitive test and a difference of even 5 dB is sufficient to lateralise the Weber.

Principle: This is a modified Schwabach’s test where, the bone conduction level of patient is compared to that of the clinician. It includes occlusion of the External Auditory Canal by pressing the tragus to reduce the ambient sound in the surrounding, which is not done in Schwabach’s test. 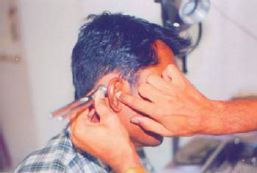 a. Bing test: This is like ABC test, but the external ear canal is alternately closed and opened by pressing and releasing the tragus.

b. Gelle’s test: Tuning fork is placed on mastoid and the pressure in the ear canal is increased using the Siegle’s speculum. This increase in pressure in ear canal pushes the tympanic membrane and ossicles inward, leading to rise in intralabyrinthine pressure. This causes immobility of basilar membrane of cochlea, resulting in decreased hearing.