Pattern of bone loss in Osteoporosis

5 groups based on orientation and function:

How do you remember where these trabeculae are ?

I use these general rules:

Ward triangle refers to a radiolucent area between principal compressive, secondary compressive and primary tensile trabeculae in the neck of femur. This is the area having lowest BMD in femoral neck.

Based on the loss of trabecular pattern in proximal femur, Singh index is used to assist fracture prediction. As described by Singh index, trabecular bone loss in osteoporosis initiates in the trochanter, then evolves to the breakage of tensile trabeculae, and ultimately reaches the principal compressive trabeculae.

Grade 5 – Reduction/Loss of trochanteric and secondary trabeculae leading to: prominence of primary groups and enlargement of Ward’s triangle

However, Singh’s index has been found to poorly correlate with the BMD measured using DEXA or quantitative CT scan. 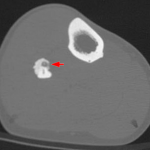